Caption your live streams! Join us on Thursday, June 25th at 2 pm ET / 11 am PT to learn about setting up and managing Falcon. Reserve your seat today. 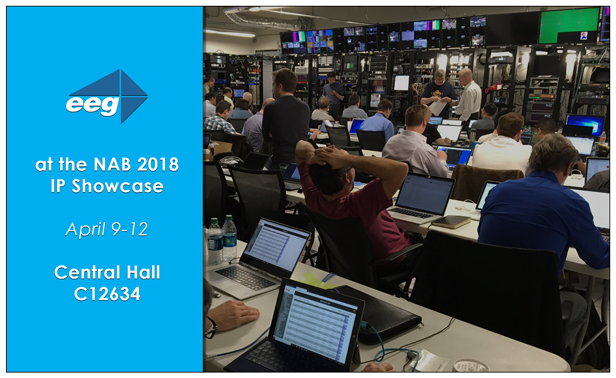 One of the most important developments in the media technology industry right now is the transition from SDI to IP for live, uncompressed, video production. And according to some industry sources (e.g. these posts from Imagine Communications and IBC), tech people and companies attempting to navigate this change are in for a bit of a wild ride, with a dizzying number of new acronyms and networking concepts to get straight.

However, after two weeks last month of representing EEG at a series of vendor interoperability events focusing on SMPTE 2110, I have to admit I was very impressed by the level of preparedness of most of the companies attending and the strength of the interoperability results.

I even left with a real sense that 2110 could work quite well in a fairly complex broadcast environment, and that maybe, most surprisingly given the stern warnings I had seen, that buyers in this space may be able to assemble functioning multi-vendor systems without actually knowing much more about the low-level arcana of high performance networking than most know about the physics of the SDI cable (which you can view here if you’re curious).

I was pleased to see how easy it was for EEG’s new 2110 iCap implementations to work with different audio, integrated playout, and SDI-to-IP gateway vendors to receive 2110-30 audio data, connect to the usual range of iCap transcription services, and return 2110-40 closed caption packets ready for monitoring, storage, transmission, or even conversion back to the SDI domain.

We also tested our implementation of PTP for synchronization of 2110 streams, and the NMOS IS-04 and IS-05 standards for device identification and unified API-driven connection management between data senders and receivers. IS-05 especially seems like a great aid to dealing with a virtual software plant in a way that should be easy either to automate or to inspect manually.

This year’s NAB Show will be the first since the suite of 2110 standards was formally approved, and based on the relatively extended draft process, and the level of participation in interoperability events, I expect there will be a strong showing of fairly complete 2110-compatible products. This represents a big acceleration of the trend over last year when many companies were only prepared to deliver systems with promises of future upgrades to comply with the draft standards.

More details on this will appear in our upcoming NAB announcement, but based on the interoperability sessions I am very excited about the solutions EEG will be able to show for completely native 2110 live captioning, as well as transitional solutions on our HD492 SDI encoder to co-originate SDI VANC and 2110-40 streams based on SDI program audio.

A final thought that I am interested to see – how soon until the current progress made with 2110 in studio, using COTS high bandwidth Ethernet routers at the core but almost exclusively specialized hardware endpoints, is able to be replicated into public cloud environments?

The promises of increased flexibility at greatly reduced cost that have long been associated with IP video are not going to be fully realized until this next step into the IT realm is also possible.

Will the industry begin to look more carefully at the suitability of specialized super-instances from cloud vendors like Amazon, which are beginning to appear with FPGAs, GPUs, and ultra-high speed networking? Or will many live media producers try to adapt to the somewhat higher latencies that pure-software implementations in the cloud would provide, because the cost savings could be so compelling?

It will be interesting to see what happens next.